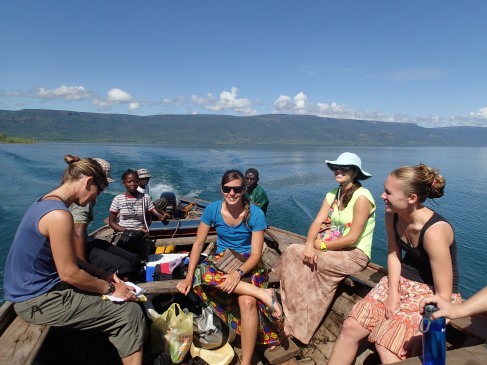 With only a few weeks left at the Lodge, we’re working extra hard to get everything done. Today we finished one project, and we’re hoping to have more done in the coming days. We’ve been making progress, but visibility has been a nightmare the last few days. Once we get deeper than 6 meters we can’t say more than 2 meters away, and everything closer than that is murky. In spite of only diving during the day I’m very glad I brought a dive flashlight.

Lake Tanganyika undergoes a regular upwelling cycle around this time of year in which nutrient-rich water from the depths rises and reinvigorates the more-shallow ecosystem. This is the primary nutrient source for basically everything that lives in the lake. We’re not sure, but given the visibility and the consistent gentle current, we’re worried it may have already happened, which means the water won’t be getting any clearer anytime soon. Hopefully we’re wrong.

I realize this week I’ve missed the Cichlid of the Week, so here it is, I’m covering a whole genus:

Lepidiolamprologus lemarii: The largest of the three Lepidiolamprologines we see regularly, males maintain territories of generally more than one female which they do not play nicely with. Generally they keep each of their females right next to their breeding shelter and they migrate between each of his females to check in on things. In the picture above you can see the male (larger fish) hovering over one of his much smaller females. Though I’ve never actually seen one eat a fish I’m trying to study, I have my suspicions… 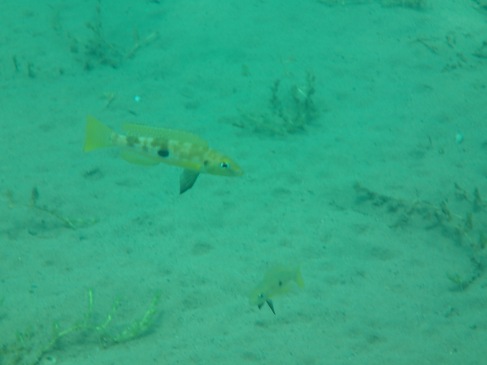 Lepidiolamprologus attenuatus: The smallest of the Lepidiolamprologines we see regularly, juveniles form large schools in the open water and have a gift for getting caught in fence nets. Mature adults form breeding pairs and defend their eggs and fry for long periods of time. We’ve been fascinated by the variation in coloration. Juveniles are tan with a black spot on either side, adults (here) are brown and mottled, and a bit west of here at Katoto the adults are bright yellow (see above). 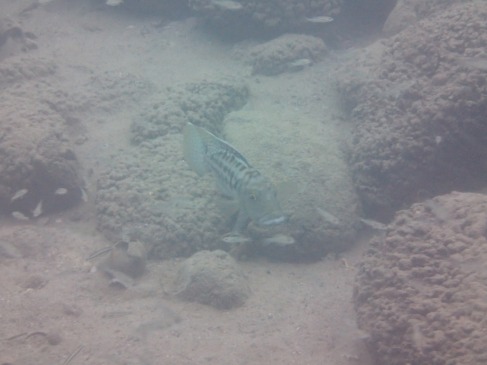 Lepidiolamprologus elongatus: These are the roving predators of the N. pulcher colonies. I’ve dealt with watching these guys take out fish that I’d hoped to run experiments on multiple times. The pair above decided to raise their offspring right in the middle of a number of fish I’d set up a long term study with. In spite of my irritation, these fish are really cool and I’m glad I’ve gotten to see a fish that I have read so much about.