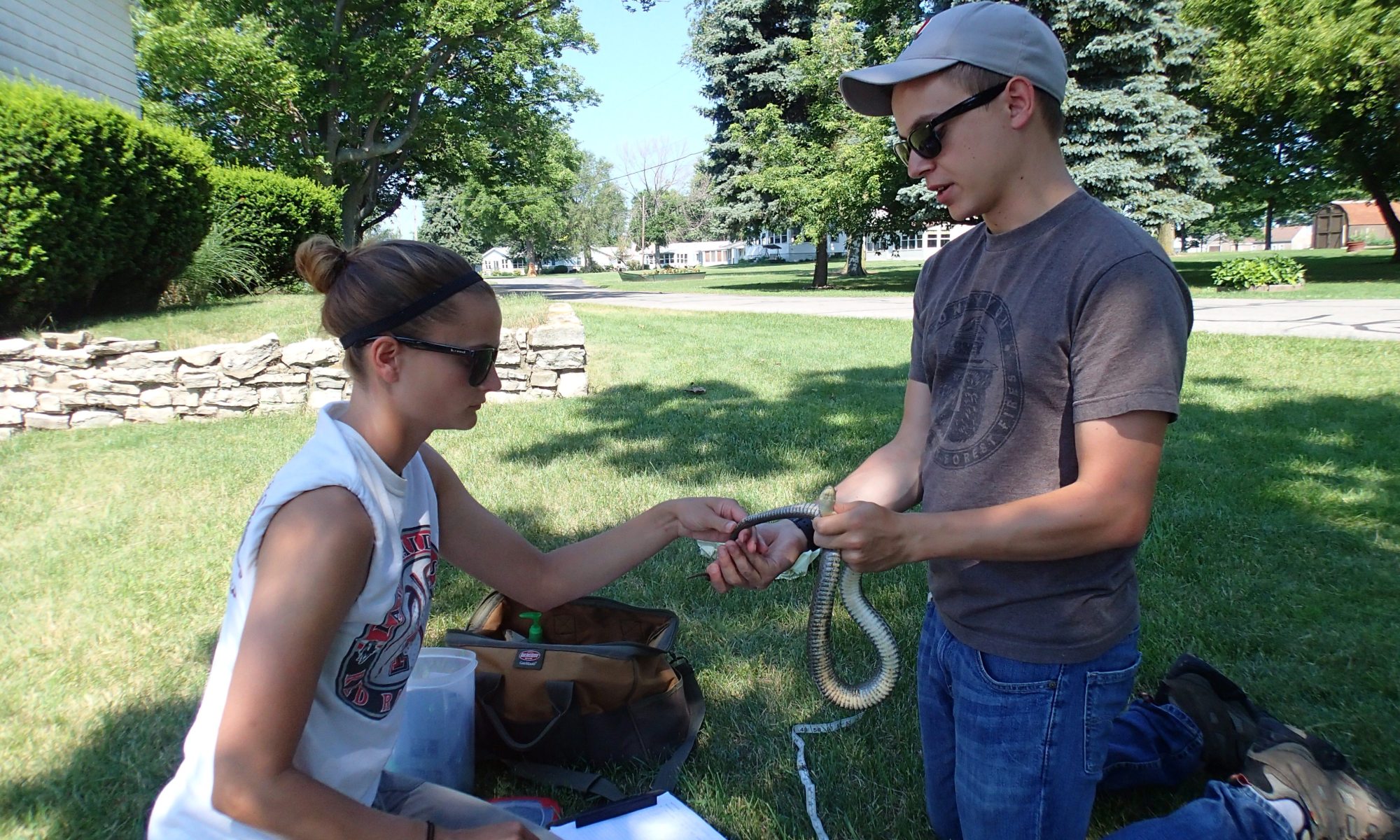 Over the past few weeks at Stone Lab I’ve gotten two opportunities to fill in for missing team members on a group studying the Lake Erie Watersnake (Nerodia sipedon insularum). The project is overseen by Dr. Kristen Stanford, and the team I was out with was led by NIU Masters student Lizzy Mack. Also along were research assistant Jen Beck and undergrad researcher Blair Perry.

While they’re asking a number of specific research questions, they’re generally interested in keeping an eye on the population of this recently delisted threatened species. While they do plenty more in the lab, field work this time of year consists of catching snakes on various islands, measuring them, microchipping new captures, and releasing them. When I was with them we caught 40 snakes one day and about 20 the second.

Catching snakes is precisely what you would expect. On my first day as the boat approached the dock on North Bass Island, Blair and Jen both spotted snakes and started running after them, leaving me standing on the deck confused and unsure how to proceed. Eventually I caught on that the best method is just to move fast and commit to the catch; stalking doesn’t pay off when it comes to watersnakes.

As a surprising number of locals we ran into were well aware from a Dirty Jobs episode that aired a few years ago, these snakes have plenty of defenses in spite of being non-venomous. We all received a number of bites, and the snakes are also prone to spray assailants with musk and excrement when disturbed. Most adults we ran into enjoyed seeing the snakes (from a healthy distance); the researchers also got a number of opportunities to do PR for the snakes, the research, and for science in general. On a number of occasions families walking by with their kids got a chance to see and touch snakes and learn about why they’re so great to have around.

As with all snakes, they’re just animals that want to mind their own business and not be bothered. As a rare success story of an threatened species bouncing back from near-extinction, it’s great to see them basking on the shore, swimming along in the bay, or doing their part to cut down the population of the invasive Round Goby (Neogobius melanostomus).

Look here for more information on the Lake Erie Watersnake recovery project at Stone Lab. This week a crew from Oasis HD (a Canadian television channel) came to do a story on the snakes; look forward to their program in the hopefully-near future!