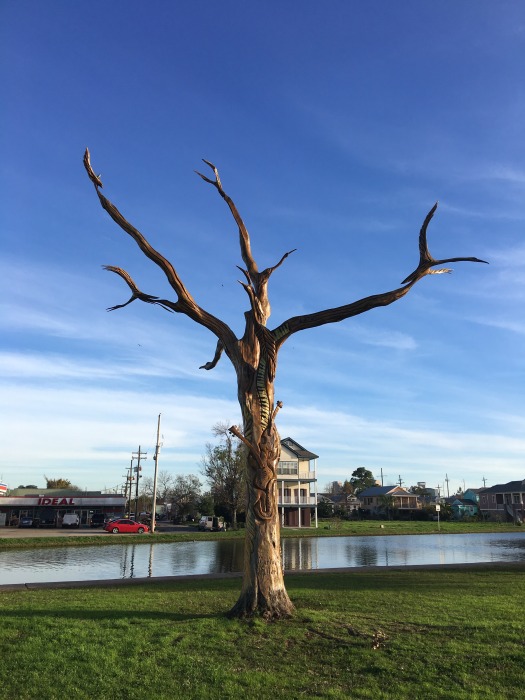 The rest of SICB was great, as was the rest of the time in New Orleans. The second day of the conference was rainy day, followed by a few unseasonably cold days, so it’s fitting that many of the talks I attended revolved around environmental stressors and measuring their impacts on organisms.

Dr. Rosvall described a study she performed on male Dark Eyed Juncos to understand how they responded to perceived territorial intrusions by other male birds. A common and well-accepted way to bird researchers trick birds into thinking another bird is intruding on their territory is to play audio samples of those birds singing. One experimental group had heard song clips the entire day before samples were taken (persistent social intrusion group), another heard 25 minutes of song before sampling took place (acute social intrusion group); both groups were compared to a control group which heard no songs.

Male birds in both experimental groups sang more than control group birds, indicating that they believed a competing male to be in the area. That males in the persistent social intrusion group sang frequently was interesting because they hadn’t heard a competitor’s song that day; it was a residual effect of the previous day’s songs. Physiologically, males that had heard songs were upregulating genes that indicated they were producing more sperm (a common response in many species to perceived competition over mates). These males that had heard songs also were upregulating particular genes in their brains associated with sending signals from the brain. Most interestingly, the spleens of birds in the persistent social intrusion group had shifted gene expression of genes associated with the immune system, suggesting that there is an actual cost to engaging in competition with other males.

Dr. Hunt studies the hormone levels in baleen whales, but as you can imagine acquiring blood samples from whales can be a bit difficult. One method that is frequently used (but inherently difficult) is to follow whales in a boat and collect fecal samples as they float to the surface. Dr. Hunt described a new method she is utilizing to measure hormone levels in baleen whales – measuring the baleen itself.

Hair samples are used to measure hormones in many animals, and these samples are especially useful because as hair grows, it can give you a historical record of hormone levels over time. Because baleen is a modified hair, Dr. Hunt predicted she could measure hormone levels in baleen. She was correct, and her preliminary findings indicate that a number of hormones can be measured by examining baleen samples. This is especially useful because baleen can represent up to 10 years of the whale’s life, and there are abundant baleen samples in museums around the world!

Many species have parasites that specialize on them, and often these species evolve adaptations to avoid succumbing to these parasites. A species of cricket that lives on Pacific Islands face a predicament because a parasitic fly that specializes on crickets is attracted to the chirp male crickets use to attract mates. If a male cricket tries to attract mates, he becomes more vulnerable to the parasitic fly laying eggs on him which will eventually hatch and eat his internal organs before erupting out of his body – killing him in the process.

On two Hawaiian Islands, a “flat wing” mutation has emerged in cricket populations leaving them unable to chirp. This mutation is advantageous in that males are less vulnerable to the parasitic fly, but they cannot attract mates. In order to breed, these males are more likely to wander in search of mates. On islands where the parasitic fly is abundant, these “flat wing” males have been very successful and have become more abundant (~95% of males on one Hawaiian Island).

Dr. Balenger raised some of these crickets in environments in which they heard other males chirp, and others without any chirping males. While all of the experimental crickets were capable of chirping, males from islands that had a large number of “flat wing” males were more likely to wander in search of mates if they had been raised without the sound of chirping males. Dr. Balenger attributed this plastic behavioral trait to the evolutionary pressure imposed by the parasitic flies – if there aren’t chirping males, there may be lots of flies and that male may be better off wandering rather than calling.

Fire Ants are a problematic invasive species in many parts of the world, including the southeastern United States. There they share habitat with the Eastern Fence Lizard. Fire Ants are known to bite, kill, and eat fence lizards (as well as a number of other native species), and pose a real threat to ecosystems which they invade. It is clear that fire ant presence and bites are a stressor for these lizards, but David and his colleagues were interested in whether such stressful situations may have a lasting impact on the offspring of these individuals.

To test this, David collected gravid females and dosed half of them with the stress hormone corticosterone. These females then laid eggs, and David confirmed that indeed some of that corticosterone had transferred into the eggs by testing for its presence in the yolk (it was there). He then let these eggs develop and hatch, and found a number of differences between the experimental and control groups, including that those whose mothers had been stressed had lower corticosterone levels, and were longer than the control lizards. In future studies, David will be investigating whether these changes are beneficial to the offspring, or maladaptive and indicate that fire ants could be problematic for fence lizards.

Some amazing dinner at Gumbo Shop, and great music at Bourbon Maison! 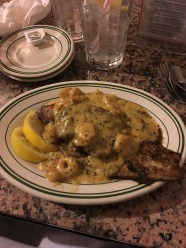 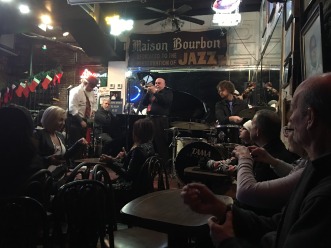