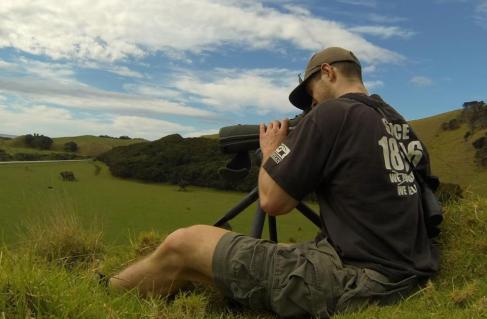 Cody Dey is an evolutionary ecologist who studies social behaviour in birds and fish. He is primarily interested in signalling, mating systems, whiskey and beards.

As you have probably heard in Isaac’s previous incarnations of “Weird Bio Sh*t”, animals do some crazy stuff. Some of the craziest traits and behaviours we observe in the natural world are those that are involved in reproduction. For example, males of many species of birds have extremely elaborate ornamentation and behaviours (check out the wild dances and songs in this video) that are used to attract mates. The evolution of traits used only for reproduction is extremely interesting to behavioural biologists because these traits are the product of strong selection (if you don’t mate your genes are quickly removed from the gene pool), however sexually selected traits often decrease the survival of their bearer (e.g. the peacock’s long tail makes it more prone to predation because it is bulky and conspicuous).

Sexual selection was first thought up by Charles Darwin himself. Typically, we think of sexual selection occurring when females choose a mate from a pool of different males. In order to stand out, males have evolved special attractive traits that are used to broadcast how sexy they are to females. Alternatively, sexual selection can also occur when males have to fight to gain access to females. In this case, males often evolve complex weapons that are used to duke it out (think moose antlers or fiddler crab craws).

This year at ABS, there was a great deal of discussion of how, why and when sexual selection occurs in animals and what consequences it has on the natural world. Robin Tinghitella told us how female choice for mates can be affected by mate availability and age. Apparently, female sticklebacks (a species of fish) are less choosy when males are harder to come by. Also, female sticklebacks get less choosy as they age. The ability of females to adjust how choosy they are allows female sticklebacks to balance the goal of gaining a high quality mate with the costs of not getting a mate at all.

Finally, we heard how male white-crowned sparrows use the colour of their crown as a signal of dominance. Males with more white on their crown are dominant over those with less white on their crown. These ‘status signals’ determine which males get the best territories and therefore get to mate. However, status signals are thought to be advantageous to all males because they can be used to resolve conflict without resorting to a full on fight, which can be extremely costly because the combatants could get injured. Status signals are common in males of many species, but behavioural biologists are still struggling to explain how these signalling systems remain honest. It is still somewhat unclear why subordinate individuals don’t grow large status signals in order to appear more dominant, but there are some emerging ideas of why this kind of ‘cheating’ may not be beneficial.